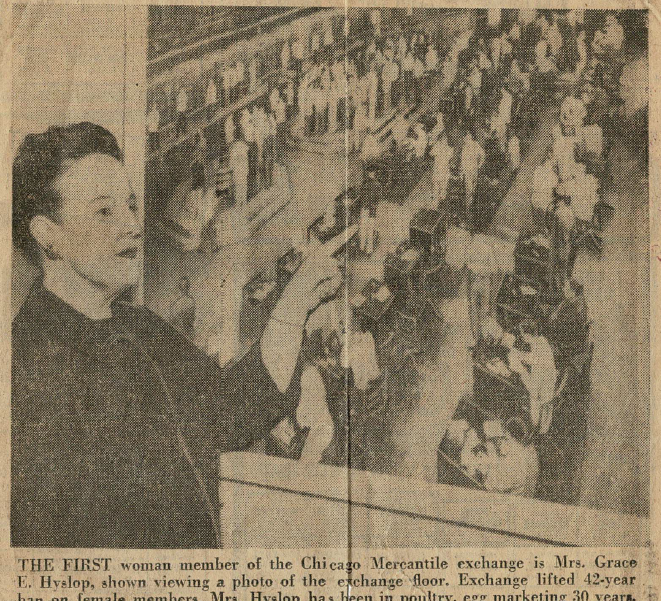 In honor of Women’s History Month, I would like to recognize a woman who made a tremendous impact on my life and my career; my grandmother, Grace E. Hyslop.

Grace E. Hyslop was able to surpass all expectations and make her mark in the world of finance at a time when it was entirely dominated by men.

Growing up in an Irish family in Nebraska, Grace knew she not only faced an uphill battle as a woman, but also as a woman of Irish decent. Instead of taking the rebellious route, Grace decided to focus on her education and graduated college at the age of 16 as an accounting major. She went on to marry her husband, Mark T. Hyslop, and joined him in his work as an egg and poultry dealer. Together, Grace and her husband made their way into commodity trading with the familiarity of the farming community behind them. After the death of her husband in 1960, Grace sold their egg company and made it her mission to claim his seat on the Chicago Mercantile Exchange. After battling with Exchange officials, the fruits of her labor finally paid off and in January 1961, Grace became the first female member of the Chicago Mercantile Exchange. Although her position came with its limitations, Grace set an example for women in finance. But she didn’t stop there. She went on to earn her master’s degree in Neuropsychology and opened her own clinic to assist students with reading disabilities.

As a woman in finance, I look at my grandmother as inspiration when facing adversity and I encourage you to look in your own family and learn about the hardworking women in your life!

Click on the link below to learn more about Grace and her incredible story.